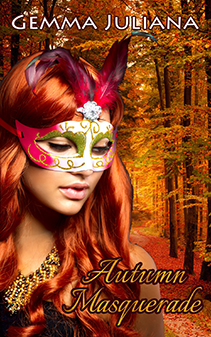 Today I noticed the leaves are changing colors, and that excites me deep inside! I believe one of Mother Earth’s greatest gifts to us is the bejeweled leaves of autumn – ruby, gold, amber, carnelian and garnet. Oh how I love them!

During autumn I enjoy journaling and each year make a list of what I’m grateful for this year. All the usual things, of course – health, happiness, loving family and friends and enough prosperity to take care of our needs with a little left over. But each year there are a few surprise things to give thanks for as well.

When it comes to making my autumn nights ‘hot’ I enjoy nothing more than snuggling up with my husband beneath a soft throw. We watch old movies like Casablanca together. I love reading a romance that takes me far away from everyday life. In that respect I love some of the old novels as well as the newer ones. There’s a hot apple cider or hot chocolate or – on occasion – a warm glass of spiced red wine on the table beside me. I also scan old and new magazines to find recipes for this time of year, when I enjoy cooking and baking most. Yum!

Check out my new novella. Dedicated to autumn, Autumn Masquerade is the story of a psychic hiding behind a corporate role, a widower who feels guilty about his wife’s death. She speaks with the dead – does his deceased wife have a message for him? Love can overcome fear.

I hope you enjoy finding new authors and books that will entertain you as autumn gives way to winter.

So, what do you do to create your own personal version of ‘hot autumn nights’? Enter your idea of how to spend a hot autumn night in the comments section below for a chance to win a free copy of my book The Amulet, the exciting prequel to the Sheikhs of the Golden Triangle series!

a Rafflecopter giveaway
Thanks for stopping by the blog hop!

This entry was posted in Blog Hops, Event. Bookmark the permalink.